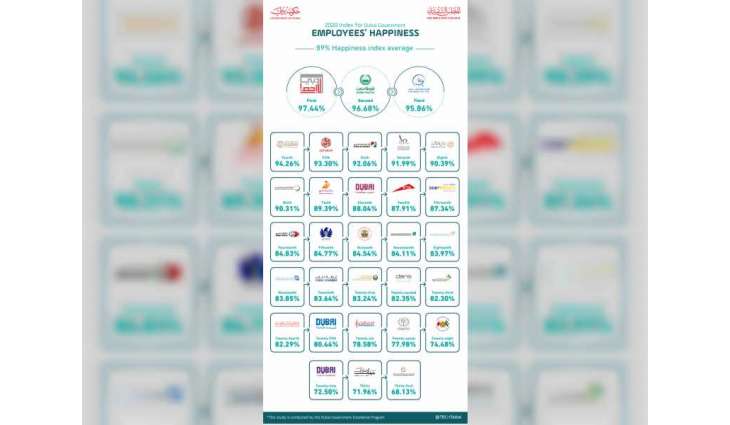 Sheikh Hamdan further said the Dubai Government supports all programmes and initiatives that aim to promote happiness, which is one of the highest priorities of the government.

He directed government entities to develop its services to meet customer aspirations so that Dubai can become the happiest city in the world.

His Highness’s remarks came as he approved the results of the 2020 Government of Dubai Customer Happiness, Mystery Shopper and Employee Happiness Index surveys. The surveys are part of The Executive Council’s Dubai Government Excellence Programme, which evaluates the service quality of government entities.

His Highness commended the efforts of the entities ranked among the top three in each Index and encouraged them to continue their efforts to achieve the highest levels of excellence.

“Happiness is a core value for us as it is an integral part of the vision of His Highness Sheikh Mohammed bin Rashid. To ensure this vision is translated into reality, we decided in September 2019 that the results of the Government of Dubai Customer Happiness, Mystery Shopper and Employee Happiness Index surveys will be released annually on 18 January. I would like to congratulate the top three ranked entities in the Customer Happiness Index which include Dubai Police, Dubai’s Roads and Transport Authority (RTA) and the Dubai Health Authority (DHA). We also congratulate the winners of the Employee Happiness Index surveys including Dubai Statistics Centre, Dubai Police and Dubai Public Prosecution,” His Highness said.

“Despite the challenges posed by the COVID-19 pandemic, Dubai Government exceeded expectations in the Customer Happiness survey with an average customer happiness rating of 84% and an average customer confidence rating of 95.1%. Today, I announce a new system for the Mystery Shopper Index to become an independent survey that we will conduct among government entities. We will send quarterly reports featuring the results of the Mystery Shopper survey to every entity to help them develop and improve their services,” His Highness noted.

“At a time when governments and companies have held off on assessing employee happiness and satisfaction due to the COVID-19 situation, we have continued to measure it through our annual survey. We are proud of the results achieved by Dubai Government entities who attained an average Employee Happiness rating of 89%,” His Highness added.

“Furthermore, achieving a 92% rating in the index that measures the responsiveness of government entities in dealing with the COVID-19 situation, demonstrates our exceptional crisis preparedness. I would like to thank Dubai Government taskforces for their resolute efforts. I urge everyone to continue working hard in a spirit of teamwork and collaboration so that the Dubai Government can create the happiest and most excellence-driven environment possible in line with the vision of His Highness Sheikh Mohammed bin Rashid,” Sheikh Hamdan said.

H.H. Sheikh Hamdan also commended the distinguished performance of the Dubai Statistics Centre, which maintained its top place in the Employee Happiness Index for the ninth year in a row.

Dubai Police ranked Number 1 in the customer happiness category achieving a rating of 91.6%, followed by the RTA with 90.1% and DHA with 88.5%. The scores in the Index were based on customer feedback surveys that were designed according to the specific nature of each entity. Both face to face and phone surveys were conducted among customers. In addition, the Dubai Government Excellence Programme trained people from different nationalities to participate in the Mystery Shopper survey.