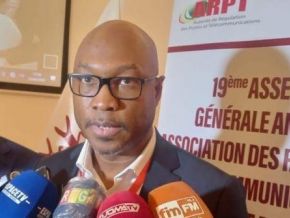 (Ecofin Agency) – Sekou Oumar Barry (photo), Director General of Guinea’s Regulatory Authority for Posts and Telecommunications (ARPT), is the new director of the West Africa Telecommunications Regulators Assembly (WATRA). He was elected at the 19th Annual General Assembly of the institution held in Conakry, Republic of Guinea, from March 29 to 31.

As the new chairman of the WATRA, Mr. Barry will lead the assembly’s activities in the coming year. He will be assisted by the remaining members of the executive committee. The said members are notably the representatives of Mali and Sierra Leone, who are respectively first and second vice-presidents of WATRA.

“We have several plans for the current mandate. One of the most important is free-roaming in the sub-region. We will make it a priority because it is very important for [telecom] users,” said Sekou Oumar Barry.

According to the new chairman, another focus of his mandate is the harmonization of some regulatory procedures.

Umar Danbatta was elected to lead WATRA in 2021. During his tenure, he worked on a number of projects. The projects include a draft four-year strategic plan per the resolution of WATRA’s 18th General Assembly and the deployment of WATRA’s new automated asset management system. He also oversaw the successful organization of various programs to build members’ capacities, the optimization of WATRA’s accounting, finance, and budgeting process as well as the elaboration of procedures for better accountability. During his mandate, some member states partially paid long-standing dues.

“If one big regional market in which ICT policies and regulations are aligned is created, WATRA members can drive ICT investment and growth faster in their respective countries and collectively in the sub-region,” Danbatta said in his handover address.