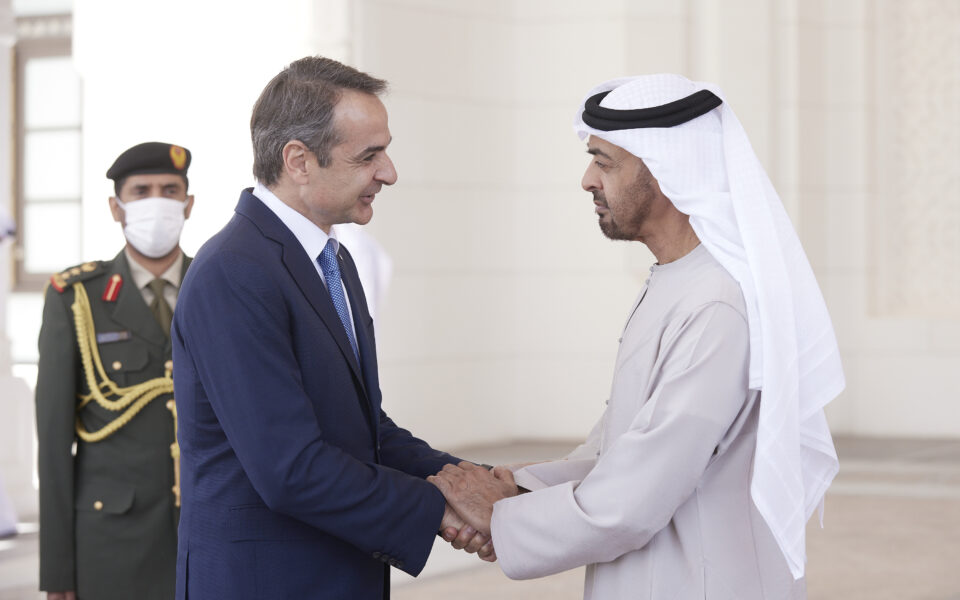 Prime Minister Kyriakos Mitsotakis completed his visit on Monday to the United Arab Emirate with the signing of a series of important agreements, while making the case for Greece’s potential as an energy gateway.

After talks with Crown Prince of Abu Dhabi Mohamed bin Zayed al-Nahyan, Mitsotakis stressed Greece can become a key entry point for natural gas to the European Union from the Middle East and the southeastern Mediterranean, while vowing to strengthen Greek ties with the UAE.

“We demonstrate our common desire to give even greater depth to our truly strategic partnership,” said Mitsotakis. “Greece has the potential due to its geographical location to become a gateway for natural gas from the Middle East and from the southeastern Mediterranean to Europe,” he said.

At the same time, Mitsotakis stressed Greece is speeding up gas exploration in its own national territory.

“This prospect could create room for further strategic cooperation [between the two countries],” he said, while expressing interest in the development of offshore wind farms.

For his part, the crown prince referred to Mitsotakis as a “friend.”

“We are confident that this visit will strengthen the good relations that the two countries already have. The emirate seeks to advance these relations at all levels, such as energy, technology, health, but also food security,” he said.

The same reports said the renewal of the successful cooperation of the Hellenic Development Bank with the state investment fund Mubadala and the creation of a joint initiative for the realization of investments in Greece to the tune of 4 billion euros is crucial for the development of economic relations.

Speaking in Athens, government spokesman Giannis Oikonomou hailed what he called Greece’s “multifaceted, active and active diplomacy, which is expanding the scope of the country’s international relations for the benefit of our national interests and stability.”

Mitsotakis and the crown prince also discussed developments in the East Mediterranean and the Middle East, with the former referring to the “provocative behavior of Turkey, which not only complicates bilateral reconciliation but endangers stability in the region.”