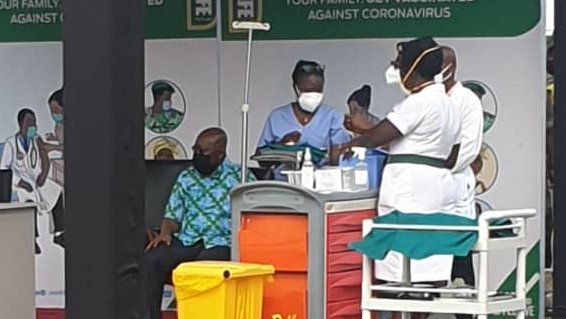 
The President of Ghana, Nana Akufo-Addo has become the world’s first recipient of the coronavirus vaccine from Covax, a scheme to procure and distribute inoculations for poorer countries.
A wider Covax programme will begin in Ghana on Tuesday but health workers in Ivory Coast are being vaccinated on Monday.
Mr Akufo-Addo urged people to get inoculated and not to believe conspiracy theories casting doubt on the programme.
On Sunday President Nana Akufo-Addo countered some of the common false statements and conspiracies about the safety and efficacy of the approved jabs.

The vaccine, Mr Addo said, does not change your DNA, it’s not part of a global cabal plan to “wipe out Africans,” and will not cause infertility.
The president also said experts from Ghana’s Food and Drugs Authority had declared the Oxford/AstraZeneca vaccines safe.
Pregnant women and children below 18 years old are not part of the vaccination campaign. The authorities have said they don’t have enough data on the possible side effects of the vaccines on such groups.
Meanwhile, The World Trade Organization’s new director-general said on Monday the trade body needs to work with companies to open up more manufacturing sites for COVID-19 vaccines in developing countries.


“People are dying in poor countries,” said Ngozi Okonjo-Iweala in a speech to the WTO’s 164 members at a meeting in her first day in the job.
According to Reuters, WTO chief called for focus on working with companies to open up and license more viable manufacturing sites now in emerging markets and developing countries.