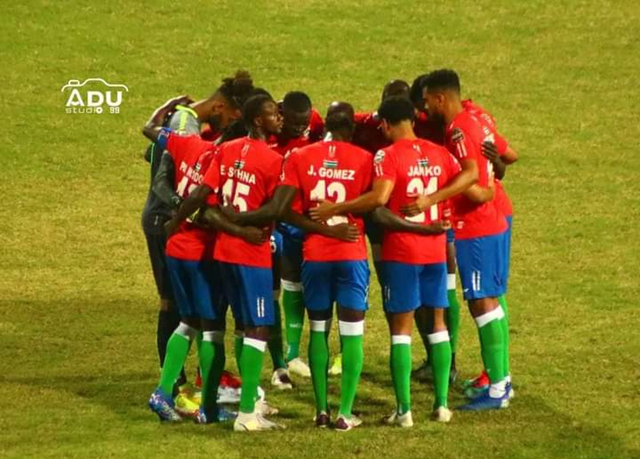 As Gambia’s senior male football team [the scorpions] set to make a back-to-back appearance in the Total Energies African Cup of Nations, some Gambians have reacted to the AFCON qualifiers draw which was held in Johannesburg, South Africa on Tuesday evening.  The Total Energy AFCON 2023 tournament in Ivory Coast will begin in June.

The Gambia is being grouped alongside Mali, Congo and South Sudan.

The Scorpions of The Gambia announced their appearance in the continental football showpiece in Cameroon this year and went on to play the quarter-final, a performance that stunned the football world.

Reacting to the draw,  Sainey Kanyi, a Gambian based in Senegal said the draw is a fair one to Gambians. He remarked that the recent exploit of the Scorpions makes the team above others in the group. The Dakar-based budding Gambian Football administrator, however, explained that the Gambia should not be complacent.

“These are familiar opponents although we must not be complacent if we want to book a spot for the next edition in Ivory Coast, 2023. The work to Ivory Coast should start now, he told TFN.

The scorpions played against these opponents in the last 18 months and managed to be above average. The last time the country played against Mali was in the group stage of the African Cup of Nations in Cameroon earlier this year with a nail-biting one-all draw.

Momodou Bah, a BBC sports correspondent in The Gambia sounded hopeful after the draw.  The Real De Banjul Secretary-General said he doesn’t expect the Scorpions to finish the qualifies below two top.

“It’s a decent draw for the Scorpions and one that I expect them to finish in the top two.”. He said that Gambia’s past games with these countries will help them.

Unfortunately for the Scorpions, they will not be playing the qualifies in front of rhe home fans at the independence stadium. The country’s biggest football field is deemed unfit to host CAF games. This means that The Gambia will play its home game in Morocco.

Responding to the draw, Yaya Manneh, a senior football coach in the country and the current head coach of Elite United said the group is the most challenging group for the Gambia. He argued that the Scorpions are good at playing bigger nations and struggled against the less fancy sides.

“The Gambia as a nation is mostly good at playing against big nations whilst we continue to struggle in getting the desired results against countries which are at our level or below.”

According to Coach Manneh, the only good thing he sees in this draw is that the players escape from the pressure from the fans when playing at home.

“The only good thing, in my opinion, is that we are playing our home matches away in Morocco. Many Gambian national teams don’t feel comfortable playing at home at the stadium which I believe is due to constant pressure from the fans,” he to TFN.

Alhagie Malick Jobe, a Gambian football zealot expressed a similar thing. He equally noted that this will be more difficult than the qualifies for Cameron. He said Mali will be a tougher opponent but feared that Congo will come for revenge after our previous encounter.

“Congo on the other hand would want to revenge cause we’ve eliminated them in the last qualifier. I believe they’re going to prepare themselves more”. For South Sudan, the young man said that will be a walk-over.

For Amadou Jaiteh, it might be difficult for the boys without the home fans but believe that they will make a back-to-back appearance in the competition.