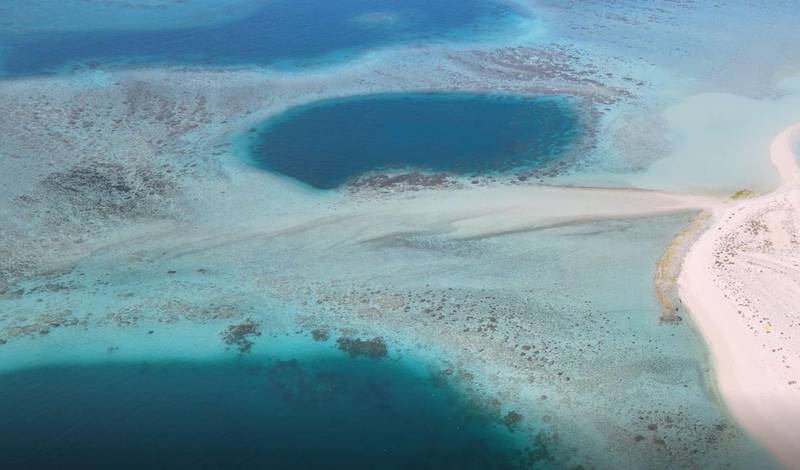 In a new revelation, environmentalists in Abu Dhabi have recently discovered a rare ‘blue hole’ in the Arabian Gulf. The underwater sinkhole that lies just off Al Dhafra, was found during Environment Agency – Abu Dhabi’s routine surveys and has now been named—Al Dhafra Blue Hole.

The underwater hole is about 12 metres deep, 200 metres wide and has an area of about 45,000 square metres. The hole is surrounded by marine life that includes grouper, sweetlips, emperor fish and jackfish and at least 10 different coral species, which form a reef at the edges of the hole.

According to the Environment Agency, the hole is a significant sighting as it provides a glimpse of how historic reefs used to look in Abu Dhabi.

To discover more about its geological composition, marine experts will conduct an environmental assessment survey of this unique ecosystem, that involves mapping the area and analysing seawater.

.@EADTweets is monitoring the presence of a rare ‘blue hole’ found in the waters of Al Dhafra region. The natural phenomenon reflects the rich biodiversity of #AbuDhabi’s marine ecosystem. pic.twitter.com/hisiTrKlY1

In addition, to better determine the health of the existing coral reef community and assess localized ecosystem health, the department will also continue to conduct scientific and topographic surveys to further understand this unique natural phenomenon.

These similar blue holes are a natural phenomenon characterized by a deep marine depression compared to the shallow areas that surround it and can be found in other parts of the world as well.

The deepest blue hole — the Yongle, lies in the South China Sea and reaches 300 metres beneath the seabed. Other internationally famous blue holes include the Great Blue Hole in Belize, Gozo’s Blue Hole in Malta, the Blue Hole at Dabahb in Egypt, and Dean’s Blue Hole in the Bahamas.

Every experience in Expo 2020 Dubai has its charm and charm, as the place is a colorful art painting with the vocabulary of human...
Read more
News

Karnataka being a hub of startups in India is keen to offer ground-breaking solutions to private companies and government organisations of UAE in...
Read more
News

Dubai, United Arab Emirates, 14 October 2021:Plunge, splash and have some fun with your loved ones at Sofitel Dubai The Palm this October....
Read more