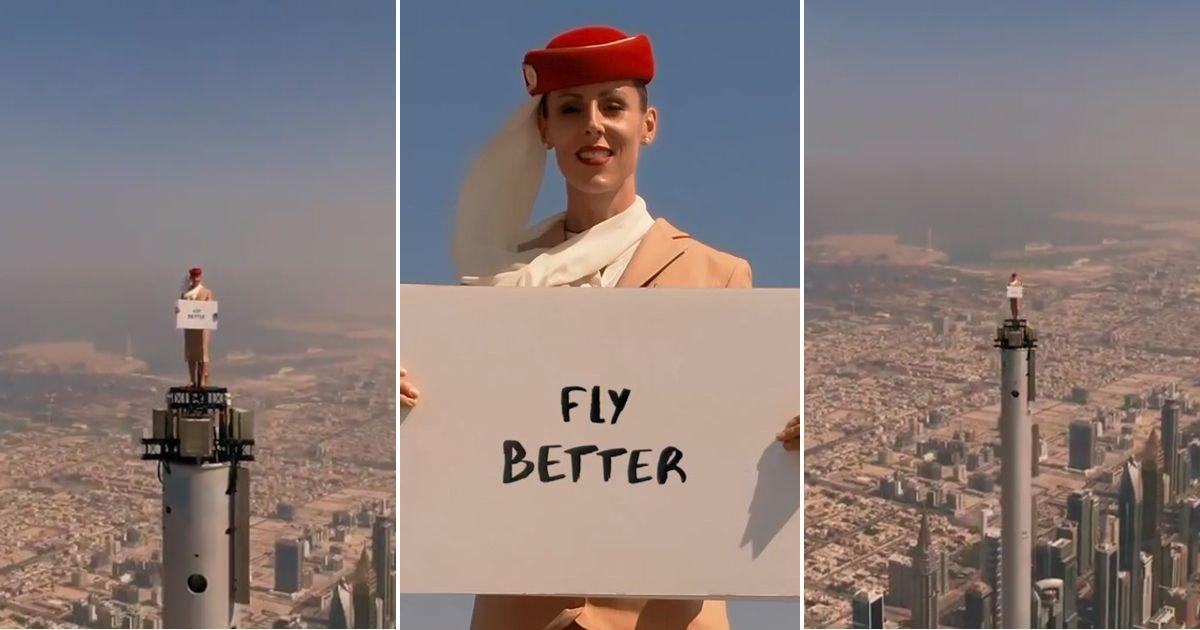 Flight attendant of Emirates Airlines stood at Burj Khalifa to announce the new travel plan issued by the UK in a viral video. A drone camera zooms out to show the air hostess standing at 830 meters above the ground.

The video shows a scary yet adventurous expression of gratitude to celebrate the exit of UAE from the UK’s red list and upgraded to amber as travel rules change. In the video, a female is seen wearing the uniform of the Emirates flight attendant. The video was shared on the social media platforms of the airline on weekend. The stunt was to show gratitude for being moved out of the red list. The brave air hostess smiled as her dress fluttered in air at the top of the sky scrapper. She flipped placards reading the message from Emirates Airline.

The flight attendant in the video is Nicole Smith-Ludvik. She considers herself a “world traveler, skydiver, yoga instructor, hiker, adventurer,” according to her Instagram.

“This is, without a doubt, one of the most amazing and exciting stunts I’ve ever done,” Smith-Ludvik shared on Instagram, referring to standing on Burj Khalifa’s spire.

She joins a handful of people who have stood at the top of the Burj Khalifa including Tom Cruise and Crown Prince Sheikh Hamdan bin Mohammed bin Rashid Al Maktoum.

The shoot was carried out by helicopter and drone filming company Chopper, produced by Prime Productions AMG and TECS Event.

“Being part of such a special project – not only for the fact that we were trusted to help bring this to life (yes, this is very very real) but also what it means for so many families who have been separated from their families between here in Dubai and the UK. Definitely a project we’ll remember forever,” TECS Event Services wrote of the campaign, on social media.

On Wednesday, UK had announced to take off Bahrain and UAE from the red list. This will boost tourism and will help families reunite. Passengers arriving from amber countries need to go for a 10-day quarantine but can be released after five days if tested negative.