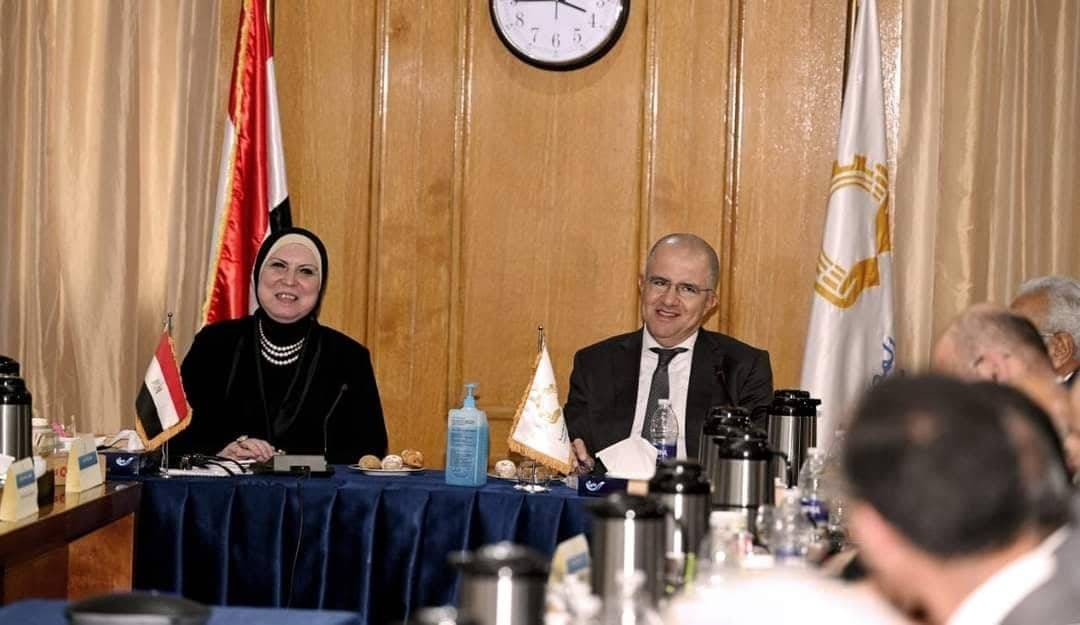 Nevin Jameh, Minister of Trade and Industry, reaffirmed that the Egyptian-Emirate-Jordanian Partnership Initiative, signed last week, represents an important shift in the path of common Arab industrial integration. She said during a meeting with members of the board of the Industrial Association led by engineer Muhammad Al-Suwaidi and in the presence of heads of industrial chambers and a number of heads of the ministry: “The initiative includes joint collaboration in 27 industrial integration projects to be implemented in 3 phases.”

She stressed that the initiative aims to achieve the common interest of the economies of the three countries, noting that Egypt’s participation in this initiative aims to take advantage of the great potentials of the Egyptian economy, which includes the large market, the distinguished base for industrial people. from the private sector, in addition to the network of free and preferential trade agreements.The signature between Egypt and a large number of countries and international economic blocs, in addition to taking advantage of the Egyptian market as a hub to penetrate the African market.

The Minister added that the projects in the first phase of the initiative include agricultural projects, animal production, petrochemicals and fertilizers, the pharmaceutical industry, silica, soda, polyester, textiles and furniture. The Association of Industries and its Chambers of Industry called for a vision for the participation of the Egyptian private sector in the implementation of these projects through the Executive Committee set up for this purpose, which includes in its membership representatives of the Industry Association, as it is the main representative of the industrial private sector.

The Minister stressed that strengthening the partnership between the Egyptian government and the private sector is a key pillar of the ministry’s action plan to achieve the Egyptian state’s goal of comprehensive and sustainable industrial development and to reach $ 100 billion in exports over the next few years. couple of years. years.

She referred to the directives of the political leadership to provide more support and assistance to industrialists, to contribute to the expansion of the industrial base for large and medium-sized industries and to achieve the objectives of the Egyptian state’s development plans in all production and service sectors.

She said the ministry is currently working on a new system for the procedures and services that the Industrial Development Authority provides to the industrial community, including allowing the allocation of land in the right of use system at the expense of outlays and simplifying the procedures for issuing the industrial register and permits in under the Industrial Permits Act, so that the Danish Business Development Agency is responsible for issuing the permit for the factory within a maximum of 20 working days, provided that the authority acts on behalf of the investor in handling the rest of the state agencies, especially civil protection and environment .

The Minister emphasized that industrial areas would not be offered until after they have been extended to facilitate investors and to ensure that the problems faced by producers in the detached areas are not repeated, and pointed out that there is a committee set up by the Prime Minister to decide on land allocation requests and to unite the pricing mechanism among all government agencies. This helps to meet the land needs of the industrial sector, whether it is to establish new projects or expand existing ones.

Take advantage of the opportunities

Engineer Mohamed Al-Suwaidi, President of the Industrial Association, stressed the importance of the Industrial Partnership Initiative between Egypt, the United Arab Emirates and Jordan to achieve common industrial integration between the three countries in a number of strategic industrial sectors, and pointed out the importance of maximizing benefits for the industrial sectors of Egypt from this initiative and exploit all opportunities Export and financing available.

He stressed the zeal of the Federation and its chambers of industry to make an effective contribution to achieving the goals of the Egyptian state, especially in view of the strong support from the political leadership and government for the industrial sector, and emphasized the importance of benefiting from the great expertise, which the Federation is involved in drawing up a roadmap for the development and development of Egyptian industry.