Dubai Women’s Run, the largest sporting event for women in the Arab world, is returning for its 9th edition on 06 November 2022 at Bluewaters Island in Dubai. 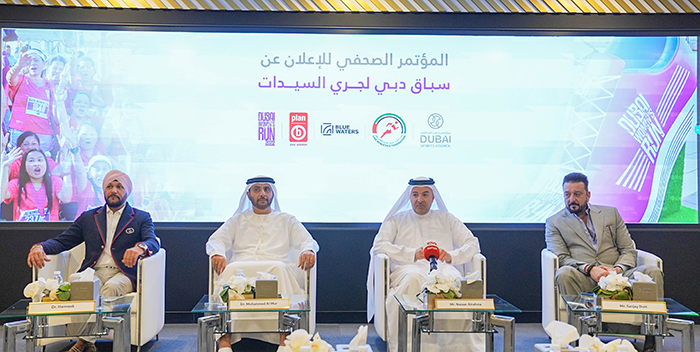 Organised by Plan b Group, in collaboration with the UAE Athletics Federation and Dubai Sports Council, Dubai Women’s Run is being held

This year’s edition will have over 6,000 runners who are expected to register for the event in a 10km and 5km race with a 3km fun run/walk that will be open to women and girls from 14 years and up.

Major General Dr. Mohamed Abdullah Al Murr, President of the Emirates Athletics Federation said “The level of the race will have a special character, and it is expected to elicit a great level of excitement and strong competition, in line with the vision of the Athletics Federation to reach the game’s horizons of development that translates the desired aspirations, because the winner in the end is the woman who enhances her prestigious position in the society, and that women’s sport embodies the commitment of women to ensuring the integrity of the mind and body, achieving a productive and happy life for herself and the community around her, enriching life and developing society and people, and achieving communication, coexistence and peace in society and in the whole world.”

This year’s route will take runners around Bluewaters which is a vibrant island destination and home to some of the city’s most original retail concepts and attractions. Participants can soak in views of Dubai’s iconic skyline and the Arabian Gulf as they soar through the stylish district and past quintessential experiences.Entertainment activities for the entire family will be taking place alongside the event that will include cultural performances, kids’ activities, food and beverage kiosks, as well as a DJ to liven up the atmosphere for the entire duration of the event.

A regular fixture on the UAE’s sporting calendar since 2010, Dubai Women’s Run is returning for the first time since the Covid pandemic hit. It aims to encourage women of all ages and from all walks of life to adopt a healthier lifestyle. Popular Bollywood actor Sunjay Dutt has confirmed his support for the event, along with other socio-civic organizations who will be running the race to support charitable causes in the UAE.

His Excellency Nasser Aman Al Rahma, Assistant Secretary-General of the Dubai Sports Council, welcomed the attendees, and said: “Today we announce the organization of the ninth edition of the Dubai Women’s Run next November, which is the most important event in the world of women’s running that brings together amateurs and professionals of various categories, which will be organized this The year is in a unique tourist area that shines in Dubai and grabs the attention of the world, which is Blue Waters Island, where the contestants will take place in various streets of the island, and the start and conclusion will be next to “Ain Dubai” the largest of its kind in the world. The event has reached the ninth edition after achieving great successes in the eight editions. In the past, where the number of participants in the eighth edition reached nearly 5,000, and it is expected that the number in the ninth edition will reach more than 6,000 participants from various categories.

He added, “We are pleased that women of various nationalities, including amateurs and professionals, will participate in the race, and that among the participants are female runners from our national team in the 10 km category, where they will compete with international runners and be an opportunity to develop the level and continue to compete in different competitive races.”

Since taking over the reins of the race in 2017, Plan b Group has made the event the biggest race for women in the Arab world and has taken it to a stature that has placed it among the more popular running competitions in the international sporting scene.

Dr. Harmeek Singh, Chairman and Founder of Plan b Group said “Being a part of the ninth edition is an achievement for Plan b and speaks volumes for Dubai which has been the frontrunner for equality and undoubtedly Dubai Women’s Run stands tall as a resilient message not only regionally but globally. I stand by the vision that our able leaders have infused in all of us and in my personal capacity backed by a passionate team, we are here to revive the initiative of Dubai Women’s Run on a bigger and better platform. This platform will contribute towards a strong social fabric with values associated with Dubai and UAE in general.”