In just six weeks after encountering the hawker, a young man, Nana Aba transformed him into a TV presenter.

This happened after Ebetoda revealed to Nana Aba how much he wished to become a journalist but had to put his dreams on hold because of financial difficulties.

Mind-Blowing Transformation: Man who worked as bricklayer becomes a medical doctor, his story inspires many

In a recent video posted by Nana Aba Anamoah, she revealed that the young man would soon be traveling to the United Arab Emirates for the very first time.

The conversation both Nana Aba and Ebetoda had in the video suggested that the occasion would also become the very first time the young man would get to step on a plane.

In the footage, the former street hawker was seen beaming with ingratiating smiles as he imagined how he would land in the city of Dubai, find the hotel meant for him, and interact with the locals.

Watch the video below

In a related story, Legit.ng reported that a young man who worked as a bricklayer went back to school and studied and became a medical doctor. 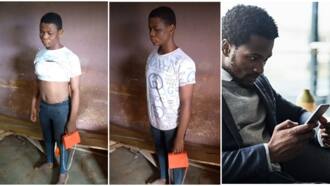 Photos of Nigerian boy who dressed as a girl and was taken home for one-night stand by fellow man, many shocked

According to the man who is from Uganda, his story could fill a book if he were to tell it to the world.

But from the little he shared, he said he has been working as a bricklayer since childhood and during holidays even as a medical student.

His inspiring story went viral and inspired many people on social media who agreed that nothing is impossible in life with the right amount of hard work and determination.