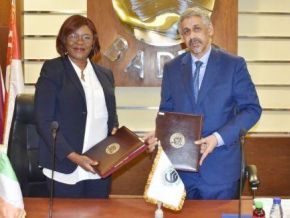 (Ecofin Agency) – Strengthening its healthcare system is a priority for the Ivorian government. In recent years, the country has multiplied projects to build or rehabilitate health centers across the territory. WHO estimated that the money allocated for the sector grew by an average of 16% every year between 2012 and 2016.

Côte d’Ivoire has secured $50mln in loans from the Arab Bank for Economic Development in Africa -BADEA- to build a new University Hospital Center in Abobo, the second biggest commune of Abidjan. A document was signed in that regard last weekend in Khartoum, Sudan, between the Ivorian development minister Kaba Nialé and a representative of the lender.

The Saudi Fund for Development (SFD) also pledged $22.72 million and the Ivorian government itself is investing $23.62 million into the project. This makes a total of $96.34 million to be invested. According to reliable sources, the center will have all medical specialties.