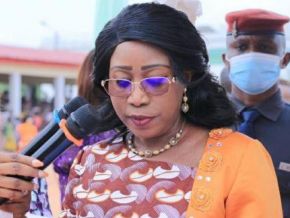 (Ecofin Agency) – Based on Côte d’Ivoire’s economic resilience, the reforms initiated by the country, the discovery of new oil and gas reserves, and tax and customs revenues, the IMF forecasts a 6% GDP growth for 2022.

Côte d’Ivoire’s tax revenues were 3% more than expected in Q1-2022, according to deputy head of taxation M’bahia Bamba Maférima (photo) as reported in an official release published Monday (April 25).

During the period under review, tax services collected over US$1.17 billion of tax revenues, US$35.3 million more than expected. Year on year, the revenue collected is up by 13%. The performance is recorded a little less than four months into the launch of an e-tax platform in the country. According to the general directorate, the platform boosts the efficiency of tax inspections.

For Q2, authorities expect close to US$1.6 billion in tax revenues. Overall, tax revenues are expected to fund about 45% of the country’s 2022 budget.

According to the International Monetary Fund, Côte d’Ivoire’s “economy continues to show signs of resilience to the impact of the [coronavirus] pandemic.”