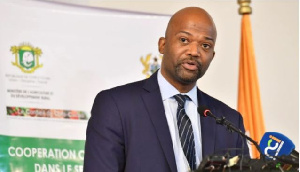 The governments of Ghana and Ivory Coast are set to sign the Headquarters Agreement for the Cote d’Ivoire-Ghana Cocoa Initiative secretariat based in the Ghanaian capital, Accra.

The Agreement to be signed in Accra, Thursday 5th August, will see the Government of Ghana accord the Initiative secretariat and its staff the needed diplomatic privileges to ensure the effective operation of the organisation.

Some analysts have described the move as significant in sending the right signal that the Ghana and Ivory Coast cooperation on cocoa for the mutual interests of cocoa farmers is here to stay.

The ceremony will climax several years of bilateral cooperation which sought to harmonise the interests of the two neighbouring West African cocoa producing giants at the international level.

Officials of two cocoa regulatory bodies, Ghana Cocoa Board and Conseil du Cafe Cacao, as well as high-ranking government representatives from both sides are expected to be in attendance.

Cooperation has so far centred on the sustainability of cocoa production, research, economics, and marketing of cocoa from both countries.

Until his appointment as the first-ever Executive Secretary of the Cote d’Ivoire-Ghana Cocoa Initiative, Mr Assanvo, 48, was the Director of Corporate Affairs for Europe and Africa at Mars Inc.

He has since been working in Accra, where he coordinates efforts by the two cocoa superpowers to promote and defend their collective position in the global market, especially to ensure decent and remunerative income for an improved standard of living for the millions of their cocoa farmers.

Chair of the Steering Committee

Two months ago, Ghana’s Minister of Food and Agriculture, Owusu Afriyie Akoto, was elected to chair the Steering Committee of the Cote d’Ivoire-Ghana Cocoa Initiative.

The Steering committee serves as an advisory body made up of top-level stakeholders and would be expected to provide guidance on critical issues by the executive body.

The two West African neighbours, Ivory Coast and Ghana, jointly account for about 70% of the world’s cocoa output.

Effective 1 October 2020, Ghana Cocoa Board (COCOBOD) began the purchase of cocoa beans from farmers with the US$400 Living Income Differential (LID) added to their payments.

The successful addition of the LID raised the farmgate price of cocoa by a historic 28% in Ghana to GH¢660, occasioning applause by farmers and Cocoa CSOs to the government who welcomed the move.