“Evaluate the efforts made in the establishment of the African Center for Research in Artificial Intelligence”, such is the objective of an exchange workshop between the members of the working group set up by the United Nations Economic Commission for the Africa (ECA). The launch of this meeting was made by the Minister of Posts, Telecommunications and the Digital Economy, Léon Juste Ibombo, on August 2 in Brazzaville.

(Cio mag) – The members of the working group set up by the United Nations Economic Commission for Africa (ECA), made up of members of the Congolese government, scientists and other actors working in the digital transformation discuss the state of play of the implementation of the African Center for Research on Artificial Intelligence.

During these five-day meetings, from August 2 to 6, these actors will have to orient their reflections on the acceleration of the implementation of this institution and the launch of the first online courses of the said center from the first quarter of 2022, in awaiting the construction of its premises.

For Minister Léon Juste Ibombo, “ It is up to the experts to review the progress made in accordance with the assigned objectives and to formulate a clear roadmap for a rapid start of activities. Also, we must, together, work without stopping to operationalize this center which will be at the service of our youth, our businesses, our administrations and our civil societies ”, did he declare. 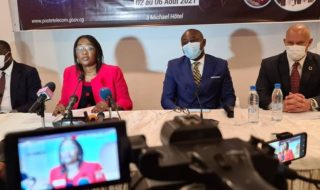 Taking part in this workshop, the Minister of Higher Education, Scientific Research and Technological Innovation, Edith Delphine Emmanuel welcomed the change that this center could bring in the sectors of health, finance, transport, education, energy, among others. “This center will contribute, on the one hand, to improving the situation of fundamental and applied research in Africa, African researchers representing, according to certain statistics, only less than 3% of all researchers and on the other hand, will serve as a lever for a better representativeness of women researchers in our continent ”. Comments reported by the Central African Information Agency.

As a reminder, the Congolese government, through its Ministers of Posts, Telecommunications and the Digital Economy and Higher Education, signed a partnership agreement with the Executive Secretary of the United Nations Economic Commission for Africa Vera Songwe, on the establishment of the African Center for Research on Artificial Intelligence at Denis Sassou Nguesso University in Kintele. The signing of this agreement took place during the 7e session of the African Regional Forum on Sustainable Development (FRADD2021) held in Brazzaville from 1is until March 4, 2021.