COACHBUILT After Sitting In Its UAE Dealership For 6 Years, Bentley Is Offering These Hand-Built Mulliner Limos To The World

In 2015, British luxury carmaker Bentley shipped out five examples of its ultra-exclusive and unique Mulsanne Grand Limousine by Mulliner to the United Arab Emirates. But it seems that nobody claimed ownership. Now, Bentley has given their customers one last chance to own what they consider to be significant pieces of automotive history, as five hand-built models go on sale yet again, this time with delivery available anywhere in the world.

The original Mulsanne Grand Limousine was initially built as a private commission. Presumably, the marketing execs thought there was a business case for the modifications made, so Mulliner was given the green light to create five more examples. The five cars were then shipped out to the UAE, where they’ve sat for the past six years. Perhaps Bentley thought that sales would be a dead cert in the oil-rich nation, but as these super-luxury cars were never used, nor registered, presumably, the plan backfired.

But what is the UAE’s loss is the world’s gain. Now Bentley has opened up sales to anyone, anywhere in the world. Maybe this time, they’ll catch the fancy of a few billionaires who like the sound of an old-school coach-built version of the Mulsanne that received a 1,000mm (39.4 in.) stretch together with 79mm (3.1 in.) of added headroom. 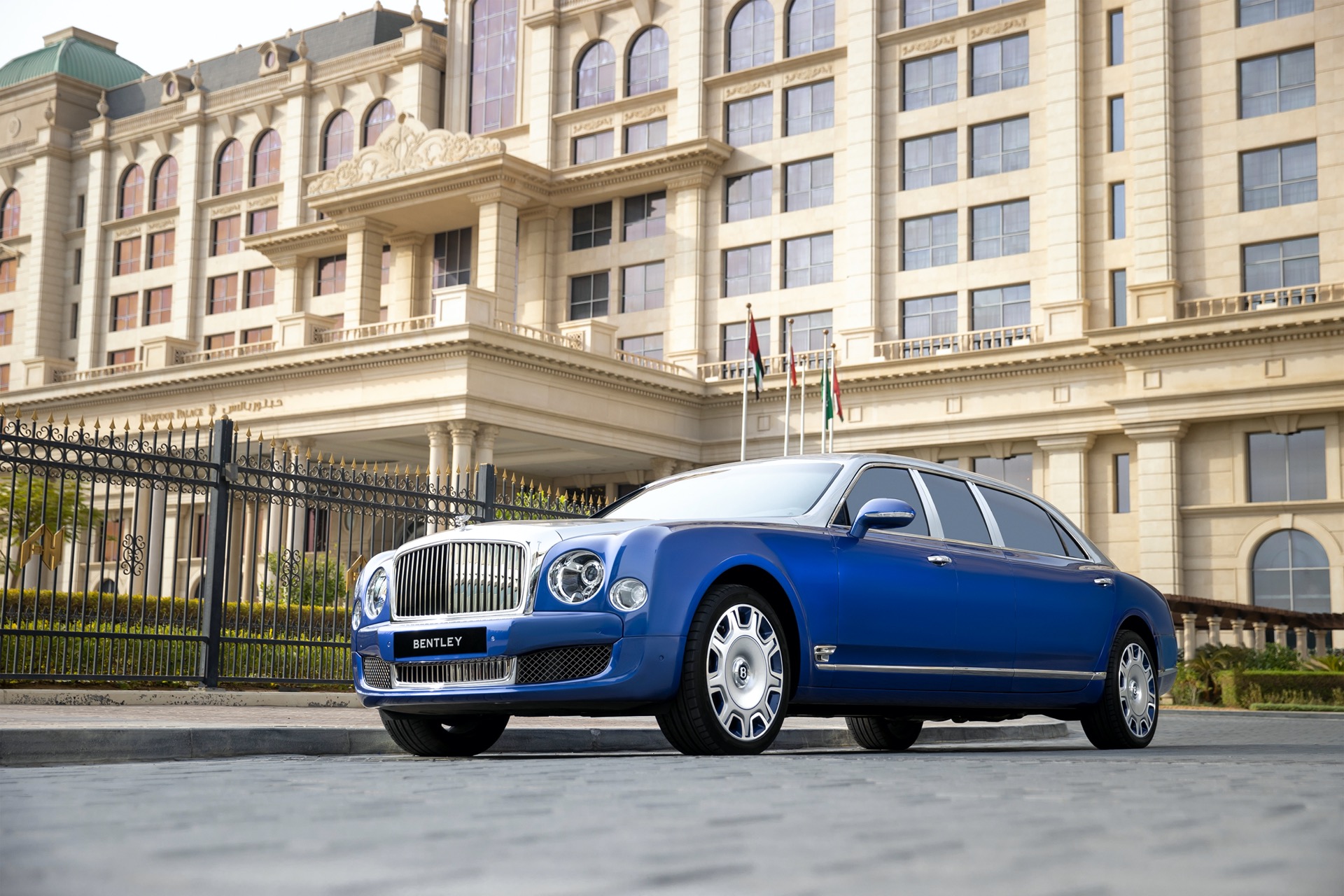 So what do you get for the undisclosed sum of money a Mulsanne Grand Limousine by Mulliner costs? For starters, the limo is also equipped with a custom climate control system that consists of two zones and allows each of the four rear passengers to manually control their own micro-climates. That’s because this business-class-suite-on-wheels was designed around offering equal comfort to each of the four passengers.

There’s a face-to-face seating arrangement — vital for those multi-million dollar deals on wheels. Of course, you get a bottle cooler with crystal flutes, a beverage cabinet with tailor-made crystal tumblers, the finest veneered folding picnic tables that allow for work while traveling, along with iPad docking and charging stations. All of this can be enjoyed while you’re enveloped in the finest leather and wood to feature inside a vehicle.

There’s an intercom system that allows you to tell Parker which turn they missed, and there lies ‘smart glass’ between the front and rear seats. It enables the entire glass panel to switch from transparent to opaque at a touch of a button — the first time such a feature was fitted to a Bentley.

The cars are a proud example of the master craftsmanship at Bentley’s Mulliner division, and with the production of the Mulsanne coming to an end last year, it’s a safe bet to say these creations will never be repeated. The one-meter longer model is placed on a re-engineered chassis with bespoke suspension to maintain stability. The limo feature’s Bentley’s famous 6¾-litre twin-turbo V8 producing just over 505hp (512 PS) and 1,020 Nm of torque (752 lb. ft).

Read: Bentayga Is The Best Seller As Bentley Posts Record Sales For First Half Of 2021 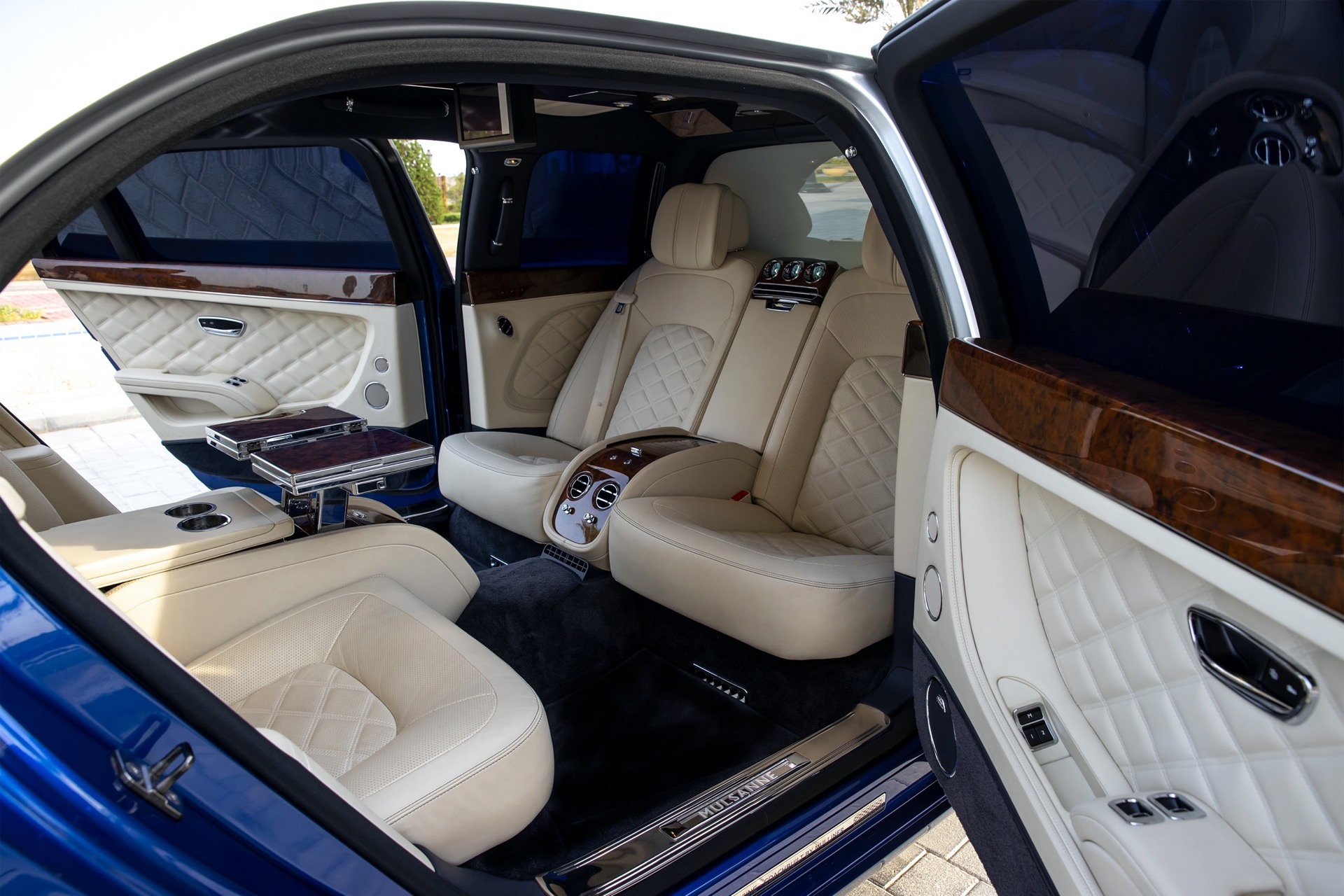 Each of the five examples on offer is very distinct, not just from any other vehicle on the road but also each other, coming with their own combination of design colors and specifications.

To complement the unique designs, each car sits on a set of 21″-inch wheels that match the car’s exterior paintwork, while even the base iconic Flying ‘B’ has the words ‘Coachbuilt by Mulliner’ engraved on it.

But despite the many changes done to enhance the smaller, Mulsanne it was based on, the Grand Limousine still retains the design and lines of its original counterpart. Bentley says that this makes it the longest manufacturer-built limousine in the world. How much does all this cost? We’ve reached out for a ball-park, but for now, it’s safe to say things are kept strictly POA.