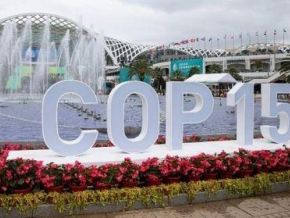 (Ecofin Agency) – During the COP14 in India, in 2019, countries renewed their commitment to achieving land degradation neutrality by 2030. Three years later, they are meeting again to accelerate the process.

Today, Monday, May 9, the fifteenth session of the Conference of the Parties (COP15) of the United Nations Convention to Combat Desertification (UNCCD) was officially kicked off in Abidjan, Côte d’Ivoire. Representatives from 196 countries are expected at the event to take stock of global actions against desert encroachment and make commitments for the coming years.

Several African Heads of State will be present at the conference, which is different from the 2022 United Nations Climate Change Conference (COP 27). They include DRC president Félix Tshisekedi, Togo’s Faure  Gnassingbé and Niger’s Mohamed Bazoum.

The most important part of the conference will undoubtedly be the 10-days negotiation between participants to define common strategies to combat desertification while taking into account ground realities.

According to the UN, humanity has altered 70% of the earth’s lands, while 40% is already degraded. It, therefore, accelerates climate change, leading to drought, floods, hunger, and biodiversity loss.

To address the situation, countries committed to restoring 1 billion hectares of degraded lands. US$1.6 trillion is needed for the task. However, funds committed are not released even though investments in fossil fuels and pollution are still sustained. For example, the United Nations estimates that US$700 billion is currently invested yearly in fossil fuel and agricultural subsidies globally. Meaning that within 10 years, about US$7 trillion will be used to subsidize fossil fuel and agriculture production.

During the COP15, African countries, which are the most exposed to desertification, will discuss major climate projects and the contributions they expect from developed countries.   They will notably discuss the Great Green Wall that garnered US$10 billion funding pledges last year and the “Abidjan Legacy Program,” presented as an ambitious solution to restore degraded lands.

“COP15 is focused on two key themes: restoration and drought mitigation. The Conference theme is: ‘Land. Life. Legacy: From scarcity to prosperity’. This is a call to action to ensure land, the lifeline on this planet, continues to benefit present and future generations. (…) COP15 actions will aim to strengthen the policies, science, capacity-building, and practical implementation of the Convention, including through working with new partners, such as youth and the private sector, and developing new and innovative mechanisms to mobilize the resources needed,” the UNCCD informs in its press kit.