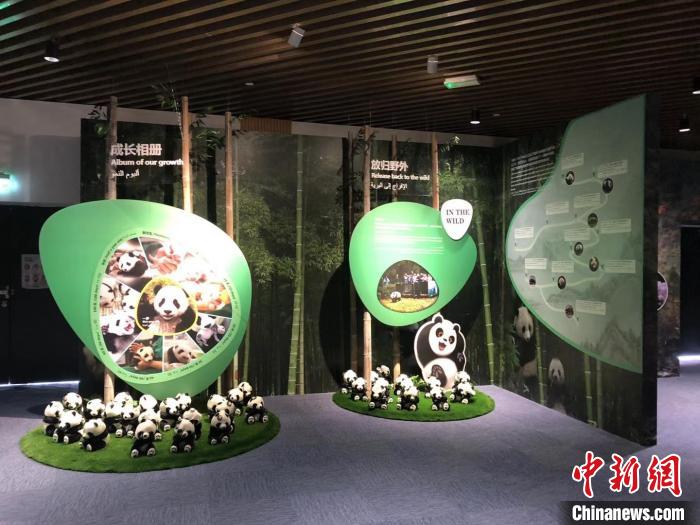 With the theme of “One Blue Sky, One Dream”, the exhibition showcased the achievements of China’s ecological construction and the effects of scientific research and protection of giant pandas.

It is understood that the exhibition mainly displays the situation of captive giant pandas that have basically reached the goal of population self-sustainment. The wild training and reintroduction of captive giant pandas based on the training method of “mother animals with cubs” by the China Giant Panda Conservation and Research Center, and The international cooperation and exchanges of giant pandas established by many countries mainly include wild giant pandas living in the six mountain series of Minshan and Qinling, and cover six sectors including the giant panda national parks in Sichuan, Shaanxi, and Gansu provinces.

In order to vividly display the situation of captive giant pandas, the China Giant Panda Conservation and Research Center will also broadcast live broadcasts once a month during the World Expo, covering six different themes such as visiting giant panda cubs, aging giant pandas, and returned giant pandas. The live broadcast will be accompanied by a breeder. Other staff members will introduce the basic situation of giant pandas and answer on-site questions, so that the general audience will have a deeper understanding of giant pandas. It will also expand the one-week limited physical exhibition into a three-dimensional and vivid cultural space.

The immersive VR interactive experience is an innovation of this theme exhibition, allowing visitors to experience the panda’s naive attitude.

After wearing the VR glasses, the giant panda cubs in the screen are within reach. Visitors can feed the giant pandas and wipe their mouths through the handle, and experience the “fun” of the panda daddy and the nan The cub led the climb down from a tree about two meters high and felt the joy of climbing.