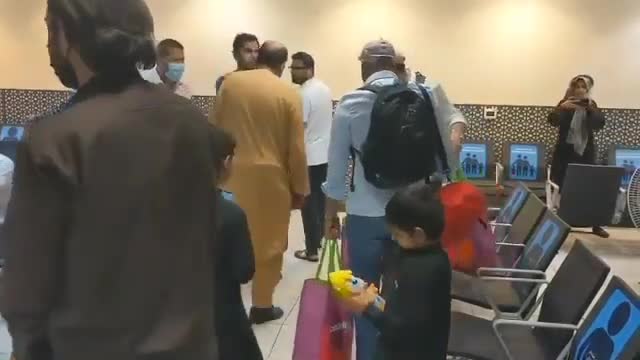 A non-profit working to evacuate people from Afghanistan, including US passport holders, said a charter flight carrying 117 people was stalled in the United Arab Emirates since September 28, after US officials denied landing clearance.

This footage, from the non-profit group Project Dynamo, shows children being given toys after landing at Abu Dhabi airport from Kabul.

Organizers told Storyful the evacuation flight was carrying 28 US passport holders, 83 green card holders, and six people who were granted Special Immigration Visas for working with the US government. Fifty-nine children were among those on board, the organization said.

According to Reuters, citing one of the group’s founders, Bryan Stern, the flight had been cleared to land at JFK airport in New York. Clearance was then changed to Dulles International Airport in Virginia, before landing rights for anywhere in the US were revoked.

“They escaped the regime they were running from only to have the government they were running home to turn them away. This cannot be what America does to Americans,” the group said in a statement on Instagram.

Storyful has contacted the Department of Homeland Security for comment. Credit: Sean Patrick/Project Dynamo via Storyful