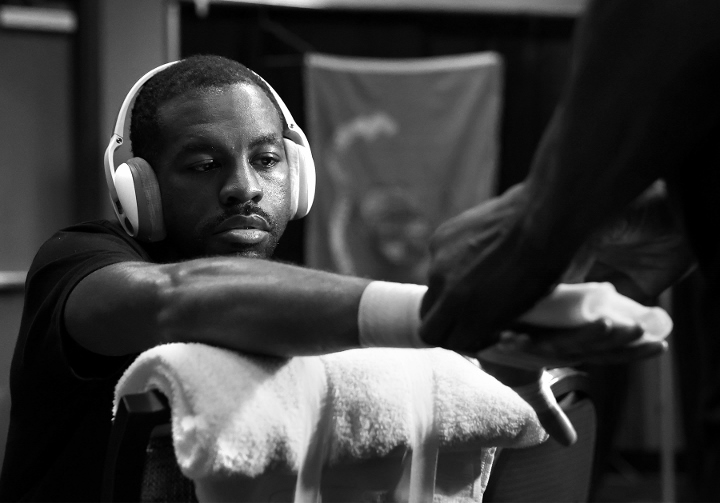 Carl Frampton arrived in Dubai on March 16, more than 2½ weeks before his fight against Jamel Herring for Herring’s WBO junior lightweight title.

Herring didn’t fly from the United States to Dubai until Friday, which means he’ll be there for only one week prior to entering the ring April 3. Belfast’s Frampton feels that’ll be a big advantage for him because Herring hasn’t given himself enough time to acclimate to a 10-hour time difference and the heat in Dubai, where temperatures regularly reach the mid-90s at this time of year.

“I’ve been here for two weeks almost,” Frampton told BoxingScene.com. “The time difference from where I’m from is four hours, and it took us about a week to get over that completely. Jamel Herring is not gonna be over this completely by the time the fight comes around. I think this is about 11 hours’ time difference from where he trains [Colorado Springs], maybe 10, and it’s a lot of traveling as well. I think it’s a big mistake for them to be coming out too late.”

The Herring-Frampton fight will be held at Caesars Bluewaters Dubai, a resort in the United Arab Emirates’ most populous city. ESPN+ will stream the 12-round main event between Cincinnati’s Herring (22-2, 10 KOs) and Frampton (28-2, 16 KOs) and four undercard fights, starting at 2 p.m. ET and 11 a.m. PT.

Frampton was surprised when he learned Herring would arrive in Dubai so close to the night of their fight.

“Originally, I thought they were coming out 10 or 11 days pre-fight, which I didn’t think was long enough, anyway,” Frampton said. “But to hear it’s a week, I think it’s silly. I think it’s a mistake. But I’m out here prepared. I’m adjusted to the time difference already. I’m used to my surroundings. I’m used to the heat. And I’m out here because I want to win this fight. That’s the reason why I came out so early. And I’m prepared to win this fight.”

The 34-year-old Frampton found this change of scenery helpful because numerous COVID-19 restrictions remain in place in Northern Ireland.

“It’s a lot better than the UK at the minute,” Frampton said. “A lot of normality. Things are open. You can walk and sit somewhere, and have a coffee. You can’t do that at home at the minute. There’s no pubs open, no shops open, no cafes open. The weather is nice. I’d say we came here at the right time. In a month’s time, it’d be unbearable sort of heat. But we’re sitting around 30 degrees Celsius. It’s nice. It’s bearable. It’s lovely. You have to wear a mask, but obviously we’re being cautious. We’re not going into overcrowded places. We wanna be careful we don’t pick up COVID.”

Keith Idec is a senior writer/columnist for BoxingScene.com. He can be reached on Twitter @Idecboxing.