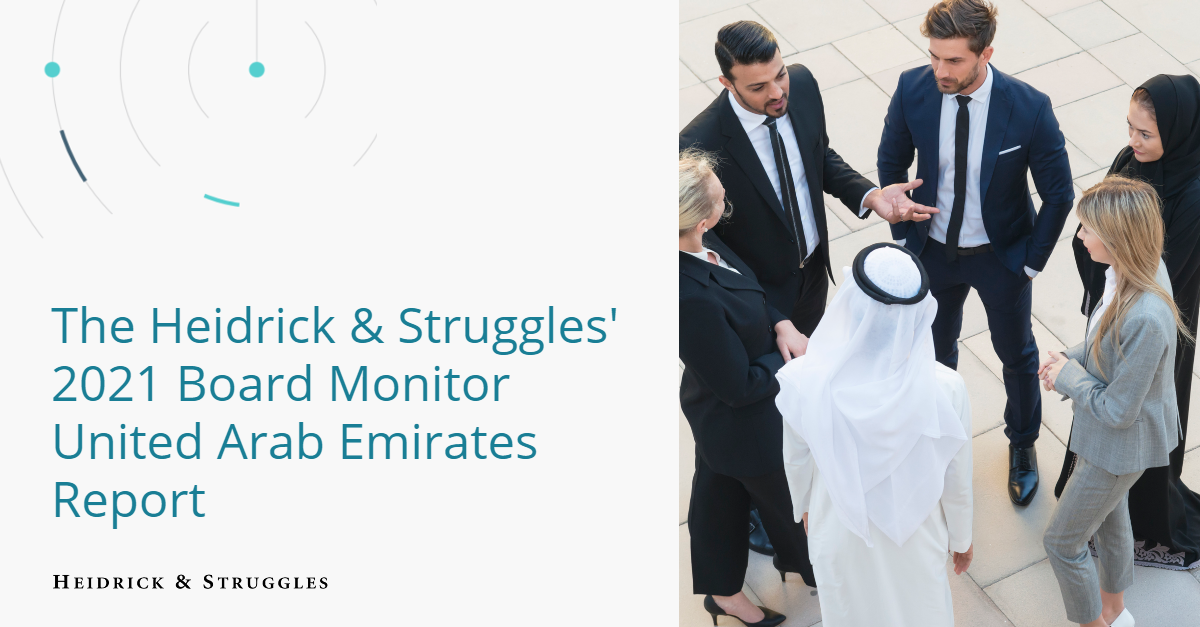 In an unprecedented year, a focus on senior executive and diverse industry experience

Board fundamentals—financial oversight and good governance—were crucial in 2020 as companies navigated through a global pandemic, geopolitical uncertainties, and economic recovery. A crucial task was to ensure company resilience in the midst of a unique storm. Many directors found themselves working more closely than ever with executive teams to keep their companies afloat, and working at a faster pace than ever before. Boards were increasingly expected to not only address topics as wide-ranging as community responsibility, sustainability, and diversity in their own composition, but to do so publicly. Furthermore, remote working and crisis management forced boards to operate differently—often outside their traditional schedule and agenda.

All of this, of course, affected how boards thought about the new members they added in 2020. In the United Arab Emirates, where we are tracking new directors for the first time,1 52 seats were filled. Seventy-nine percent of those new seats went to active, rather than retired, executives—a much higher share than Europe’s 51% or the 57% in the United States. In other regions, this figure is the share of board members currently holding executive positions; in the United Arab Emirates, many board members have ministerial roles, which we also included here.

Forty-four percent of seats on UAE boards went to people with experience as a CEO or CFO, exactly the same share as in Europe and a bit lower than in the United States. It’s notable, however, that almost all of those seats went to people with CEO experience, while in other regions, there is more balance between the two roles. A quarter of seats were filled by people from other countries, lower than Europe’s 40%, and most seats were filled by men. We see ongoing preference for board members with executive experience in the region, and they, for historic reasons, are more often male.2 As the region’s economy transitions away from its historic focus on oil and gas and as companies seek more international presence, we also see boards adding members with experience in other industries; in the financial services, industrial, and technology sectors, fewer than a third of seats were filled by people with experience in that sector.

New directors found themselves joining boards dealing with myriad, unprecedented challenges, which led to many boards reassessing how they worked, as entire organizations were also doing. Many boards were faced with game-changing decisions. Some boards stepped back, to analyze what they—and only they—could do to support their companies, with a focus on ensuring board members can support sound and swift decision making.

Boards across the Middle East are under increasing scrutiny and taking on greater levels of risk. As a result, there is increasing focus on improving board effectiveness. We expect boards to intensify their focus on their role in supporting their organization’s purpose and resilience, including continued commitment to having the right people on the board. We see boards innovating their refreshment processes, particularly, in many countries, with an even stronger focus on expanding gender and racial and ethnic representation. (For more on new approaches to board refreshment, see “Building the foundation for better board refreshment.”) We also expect boards to expand their lens on diversity itself, to even more often include non-traditional industry, functional, or international experience in order to bring in new perspectives that will help companies improve boardroom dynamics3 and enhance the quality of decision making.

We expect the directors added this year, all in all, to be part of boards that are more diverse, more committed, and more agile than ever.

Thanks to the following Heidrick & Struggles colleagues for their contributions to this report: Alain Deniau and Bernard Sykes.

1  We tracked new directors added to the boards of the 40 largest companies listed on the Dubai Financial Market and the Abu Dhabi Securities Exchange.

2  For insights on how boards are seeking to diversify, see “Improving gender diversity and effectiveness on boards in the UAE,” Heidrick & Struggles, on heidrick.com. And for more on steps UAE boards can take to increase the share of board seats going to women, see Bernard Sykes and Markus Wiesner, “Board composition and diversity: A push for greater gender diversity,” GCC Board Directors Institute, in Al Majilis newsletter, Q2.