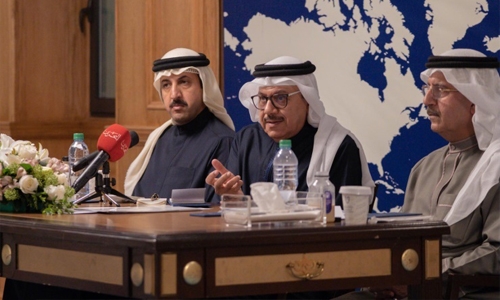 The minister stressed Bahrain’s efforts and endeavours, under the leadership of His Majesty King Hamad bin Isa Al Khalifa, to reunite the Gulf and open up new horizons for joint Gulf action and dialogue, and highlighted that His Majesty is keen to work with GCC leaders to boost the GCC progress, fulfil the hopes and aspirations of the Gulf peoples, and enhance security, stability and prosperity for the GCC countries and the region.

Bahrain is proud of assuming the presidency of the GCC under the leadership of HM the King who has always emphasized the importance of GCC unity and the significance of strengthening solidarity in a way that achieves prosperity and development and preserves security and stability, Al Zayani said.

He stressed that Bahrain’s steady approach invariably seeks peace, coexistence, strengthening cohesion among the people of the GCC states, and positive dialogues with everyone to achieve the goals that serve joint Gulf action and reinforce solidarity to face the challenges that target the security and stability of the GCC states and bridge rifts between the member states.

Al Zayani added that Bahrain is always committed to agreements and covenants that contribute to promoting joint Gulf and Arab action, and stressed that the Kingdom’s endeavours are always appreciated and praised by everyone for the active and pioneering role in preserving and strengthening the progress of Gulf action.

He noted the efforts of HM King Hamad and the endeavours of His Royal Highness Prince Salman bin Hamad Al Khalifa, the Crown Prince and Prime Minister, to solve all problems and face all challenges in order to preserve Gulf cohesion and to ensure the unity of the Gulf entity in confronting various formidable challenges.

Al Zayani pointed out that the GCC summit in Al Ula marked the start of a new phase that revealed good intentions and reflected the firm ambition and determination of the GCC leaders to consolidate collective action and address all problems and challenges that may hinder its progress.

He stressed that this determination converges with the aspirations and ambition of the Gulf peoples to accomplish further achievements and boost solidarity, mutual support and joint action.

Reviewing some of the statements in the Summit communiqué, Al Ula Statement and Al Ula Declaration, the minister praised especially the vision of the Custodian of the Two Holy Mosques King Salman bin Abdulaziz Al Saud, the statement about economic unity and cooperation, the common market, food security, the railroad linking the GCC states, the settlement of the Gulf crisis and the joint Gulf dialogue.

He lauded Saudi Arabia’s tremendous efforts in strengthening Gulf cohesion and highlighted the Kuwaiti mediation led by His Highness Shaikh Nawaf Al Ahmad Al Sabah, the Amir of Kuwait, and the steady and direct coordination between Saudi Arabia, Bahrain, the United Arab Emirates and Egypt, considering that the sincere efforts by the GCC countries in cooperation with Egypt are an important step for dialogue, set basic points for the start of a new phase and combine efforts against any interference or entities affecting the security and stability of the GCC states.

Al Zayani expressed optimism in the next stage of the joint Gulf action and stressed that Al Ula Summit is the beginning of a new phase for a new dialogue to fulfil a renewed dream that serves the interests of the member states and marks a new move forward in strengthening Gulf action, healing the rift and adhering to the entity of the Council.

The minister praised the essential role of Saudi Arabia and its sincere and tireless work for the unity of the Gulf, in cooperation and coordination with the GCC member states.

Al Zayani also affirmed Bahrain’s unwavering and profound confidence in Saudi Arabia and reiterated the Kingdom’s thanks and appreciation to Saudi Arabia for hosting the GCC summit in Al Ula that resulted in significant resolutions that benefit the GCC countries and peoples.