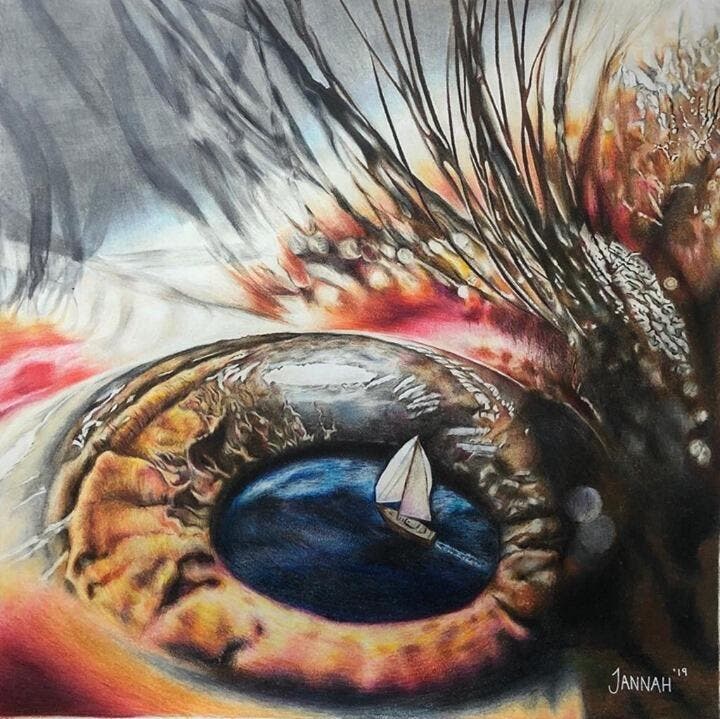 It is rare these days to stage a large-scale art exhibition. With coronavirus restrictions still in place displaying art to the public continues to be a challenge.

Yet outdoors amidst the desert sands and old Emirati edifices of the historic Al-Jazirah Al-Hamra Heritage village in the UAE’s Ras Al-Khaimah, an exhibition of more than 130 artworks — including art, photography, films and sculpture by artists from around 50 countries — proved it was possible. The display marks the ninth edition of the Ras Al-Khaimah Fine Arts Festival (RAKFAF), which runs until April 3.

Befitting these uncertain times, the festival is titled “Hope.”

In a world that is rapidly changing due to new technologies, climate change and urbanization, how can hope inspire art and vice versa? The works on display explore such questions, pondering the importance of human connection, the natural landscape, our struggles and what we have learned from the pandemic.

The Festival theme ‘Hope’ actually came about before the pandemic. In the year of the UAE’s 50th anniversary, we wanted to explore how contemporary art can help us reflect on the past and inspire our future,” Suqrat bin Bisher, festival director, told Arab News. “Nevertheless, the pandemic’s effect on society and our collective consciousness is a part of that future, so of course, many artists were inspired by their experiences during these times.”

Emirati artists on show include Azza Al-Nuaimi, Nuwair Al-Hejari, Amani Al-Mansoori and Maryam Al-Mansoori, alongside the notable names of the Gulf, such as Awatif Al-Safwan, Gheed Ashor and Om Kaithoom Al-Alawi from Saudi Arabia, Esraa Al-Enzi and Lamia Ghareeb from Kuwait, Bahrain’s Perryhan Elashmaw and Oman’s Abullah Al-Blooshi. Further reflecting the theme are artworks of birds and feathers by the US Embassy’s special guest artist Robert Clark, a National Geographic Magazine award-wining photographer.

Among the highlights is Emirati photographer Nuwair Al Hejari’s poignant photograph Harvest, which was shot in the Bidya desert in Oman last year and depicts men collecting a bountiful harvest that will bring good tidings for the rest of the year. There is also Emirati graphic designer Azza Al Nuaimi’s retro seventies style portrayal of Al Jazirah Al Hamra’s infrastructure, particularly of how the buildings appear to transform between sunrise and sunset.

There are also the captivating photographs of Emirati conceptual artist and photographer Faisal Al Rais. Strongly influenced by the

work of American street photographer Vivian Maier, Al Rais’s work attempts to deconstruct the mundane aspects of everyday life. One work in particular, Dreamer (2020) stands out and explores the endless imagination of children. One young boy leans out of a car window in contemplation, perhaps dreaming of what his life will one day be.

This year, the festival takes place in two new locations: the viewing platform at the UAE’s highest peak, Jebel Jais, and Al Marjan Island’s serene Open Park. It also partners for the first time with Art Dubai and The Arts Center at NYU Abu Dhabi.