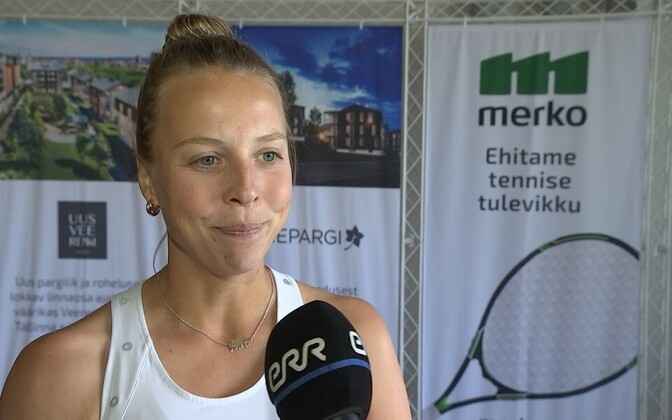 In something of a recent tradition for winning early tournament rounds in straight sets and short time-frames, the Estonian, 25, from Tallinn, ranked 24th in the world, saw off Kerber in exactly one hour.

In the previous round on the hard courts of the Khalifa International Tennis and Squash Complex, Kontaveit had meted out similar treatment to Jennifer Brady of the U.S., ranked 13th in the world, in an even shorter time-span.

The opening set Kontaveit got wrapped up in 23 minutes after breaking her opponent’s serve twice. The German, ranked two places behind the Estonian, managed to win only one game.

Set two started in a similar way, with Kontaveit soon 4:1 up in games until Kerber started to fight back, breaking Kontaveit’s service unexpectedly and soon finding herself just a game behind at 5:4, until Kontaveit held on to take the eleventh game, and set and match.

The pair had met four times before, with the Estonian winning three of these, with Wednesday’s encounter making it four, while Kerber’s sole victory came in 2019 in Cincinnati.

Kerber converted only one break point, compared with Kontaveit, who managed four out of five.

Kontaveit next faces the winner of Petra Kvitova (Czech Republic, ranked 10th in the world) and Anastassia Pavlyuchenko of Russia (41st in the world), who have yet to play. The record between Kontaveit and Kvitova currently stands at 4:2 in favor of the Czech player, while the head to head between the Estonian and Pavlyuchenko is the other way round, with Kontaveit beating the Russian the last time just last month in Dubai, also on a hard court.