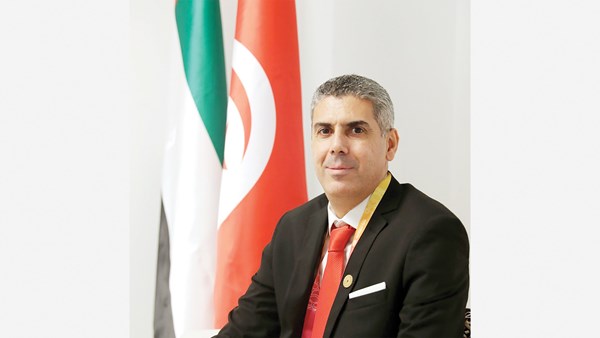 Al-Moez bin Abd al-Sattar Benamim, the Tunisian ambassador to the country, said June 14 marks the 50th anniversary of the establishment of diplomatic relations between his country and the UAE. His Highness Sheikh Zayed bin Sultan Al Nahyan, may God rest his soul.
In his speech on this occasion, the Tunisian Ambassador said: “Over the last five decades, relations between Tunisia and the Emirati have been marked by consolidation and distinction, based on ancient historical ties, based on mutual respect and common cooperation. The visit from the late Sheikh Zayed bin Sultan Al Nahyan to Tunisia constituted a year 1974, and its great influence on the nature of Tunisian-Emirati relations, and its evidence still exists today, as a starting point for joint cooperation in several and different areas.
Al-Moez bin Abdul-Sattar Benimim, the Tunisian ambassador to the state, described the Tunisian-Emirati relations as positive and prominent, which is mainly reflected in the distinguished communication between the two countries’ governments, the last of which was the visit of the President of the Republic of Tunisia. President Qais Saeed, on 14 May 2022 to Abu Dhabi, to perform his duty of condolence. At the death of the late Sheikh Khalifa bin Zayed Al Nahyan and his meeting with His Highness Sheikh Mohamed bin Zayed Al Nahyan, President of the State, may God protect him, which was a renewed opportunity to emphasize the strength of Tunisian-Emirati relations and the sincere desire to further strengthen them and elevate them to the highest levels. At the level of Tunisian-Emirate cooperation, Benamim said: “The relationship is witnessing a growing movement in many areas, in particular economic, investment, cultural and sporting relations. $ (741 million dinars), an increase of 29% compared to 2020, with the number of Tunisian companies exporting to the UAE increasing to around 228 companies.