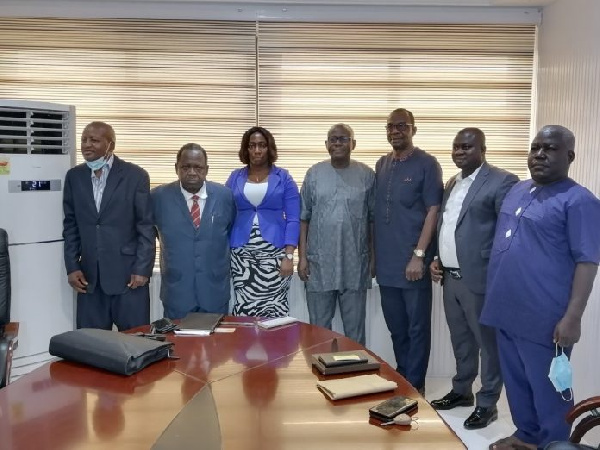 A delegation from the Union of Journalists for African Free Press from Cote d’Ivoire and Cameroon has called on the Director-General of the Ghana Broadcasting Corporation, GBC, Professor Amin Alhassan in Accra, on the decision to relocate the Headquarters of the Union from Cote d’Ivoire to Ghana.

The President of the Union, Yao Noel said Ghana had been touted as the beacon of press freedom, hence, the relocation of the Headquarters. Mr. Noel said GBC, as a State Broadcaster has built a positive image within Africa and beyond worthy of emulation. The delegation was led to GBC by the leadership of the Ghana Journalists Association.

“We are proud of Ghana and Ghana not only being the capital of African freedom of Africa since 6th March 1957, it’s also the heart of the Pan African movement. For these reasons our board has chosen to settle the Headquarters of these Continental bodies in this beautiful city of Accra.” Mr. Noel noted.

The Director-General of GBC, Professor Amin Alhassan, was delighted by the decision of the Union and assured them of the Corporation’s support.

“We are very delighted as a country to be chosen as a possible location for the Headquarters of the Union of Journalists for the African Free Press, the President said Ghana is the capital of freedom and where Freedom exists Journalism thrives.

“Indeed, Ghana is the capital of freedom and we are very excited that you have acknowledged this to us, we welcome you to Ghana and you can be assured that I will provide you with all the necessary courtesies you need” the Director-General said.

President of the Ghana Journalists Association, Roland Affail Monney, used the opportunity to ask the government to give GBC the needed attention and priority in its rebranding agenda to propel it to perform to the satisfaction of Ghanaians.

He commended the Director-General of GBC on the massive facelift of the Corporation, and called on management to match the rebranding exercise with good content to enhance its performance.

“GBC is a pale imitation of its position as the dominant Media House in Ghana, as a number of factors accounts for this development, years of neglect by the State to ensure that GBC transits from being a State to a Public Service Broadcaster, GBC need not to beg for basic equipment to undertake its basic function,” Mr. Monney said.

“It is an opportunity to appeal to the authorities to sharpen their focus on GBC so that it will be diligent in discharging its mandate to viewers and listeners” he added.

The delegation was hopeful that the mission to relocate the Headquarters will facilitate its progress. The 5-Member delegation also had the Secretary of the Union of Journalists for African Free Press from Cameroon, Jose Blaise Mbanga Kack, the Officer in Charge of Communication and Privileges at the Embassy of Cote D’ivoire in Ghana, Edwige Annick Bah and the National Organising Secretary of GJA, Albert Kwabena Dumfour.
Read Full Story