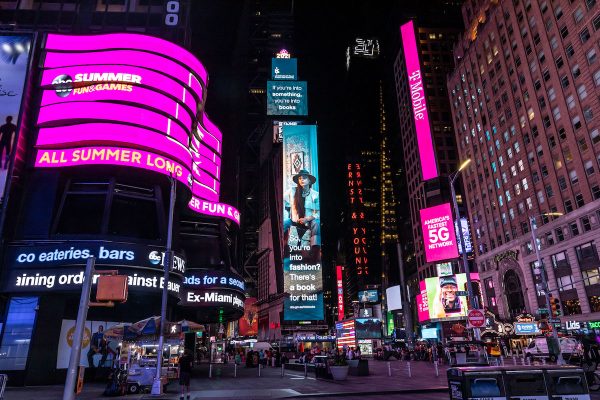 In a day and age when books are rapidly becoming less popular than pocket-sized screens, especially for the youth, Sharjah – the region’s cultural powerhouse – has asserted that there’s no ignoring books because they are in our DNA.

Spearheaded by an exceptionally witty TVC, the emirate has released its biggest ever global community-focused campaign, ‘Into Books’, which was unveiled by the Sharjah Book Authority (SBA) in August with a 360 campaign feeding into a custom-built website.

Major cities in the region and around the world – London, New York, Paris, Riyadh, Cairo and UAE – woke up to SBA’s campaign slogan ‘If you’re into something, you’re into books’, being ferried around with passengers in London’s black cabs; turning heads of millions in midtown Manhattan on Times Square’s iconic digital displays; capturing the attention of pedestrians on Avenue des Champs-Élysées in Paris and the bustling streets of Cairo; and across Riyadh’s biggest shopping malls.

Directed by SBA’s in-house marketing team in collaboration with National Network Communications, a leading homegrown smart communications agency with offices in the UAE and Egypt, the ad is the hero of the campaign. Produced by NNC in the UAE to showcase the extreme diversity of interests that books address, a regionally focused version of the TVC features a cast of 16 enthusiastic characters. A beatboxer, a baller, an Emirati horse rider, a future space explorer, and many more come together to promote SBA’s core message.

An international version, produced by Good People across 9 locations worldwide, reimagines the humorous narrative with a global cast, and drives home the message that books are relevant to us no matter where we are or what our interests in life may be.

The ad is available on Sharjah Book Authority’s YouTube channel and across its other social media channels.

The TVC, along with all other mediums of digital advertising surrounding the campaign, push the public to a custom-made website that offers book recommendations based on the user’s interests and personality. The page provides an interactive experience, whereby users answer a set of questions – mapping their personalities and eventually leading them to their ‘reader type’, as well as some hand-picked books available from discounted distributors.

Khoula Al Mujaini, director of marketing, SBA said, “Releasing this message in this way is something we were certain about. The literary scene does not get the hype it deserves, so adding this level of creativity expresses our sincere commitment. Every now and then, Sharjah will send out a message to the world, reminding people to pick up a book and get lost in its pages. And here in Sharjah Book Authority, we are committed to amplifying Sharjah’s voice and it’s cultural vision to reach every corner of the world where there is a reader or a potential reader. With Into Books, we’re looking straight into your eyes and telling you that hey, find one book that means something to you, and you’ll be hooked. It’s a simple message with the potential to change the lives of 7.9 billion people on earth and shape a global future where everyone is empowered with knowledge and have a genuine passion for the written word. And this campaign, the first-of-its-kind regionally and globally, is reaching our target audiences in their homes, during their trips to work or school, within their passions and hobbies, whether outside, inside or online. Basically, everywhere.”

‘Into Books’ has become SBA’s most successful advertising campaign in its history, being viewed 10.8 million times and shared by audiences 13 thousand times over social media.