The United Arab Emirates’ Hope probe has successfully entered Mars’ orbit after a nail-biting journey that could have ended with the spacecraft crashing into the planet or missing it altogether.

Emirati scientists cheered as news of the success was broadcast. The Hope probe, or Amal in Arabic, is a source of immense national pride for the UAE, which is the first Arab state to launch an interplanetary space mission.

“To the people of the UAE, to the Arab and Muslim nations, we announce the successful arrival to Mars orbit. Praise be to God,” said Omran Sharaf, the mission’s project manager. 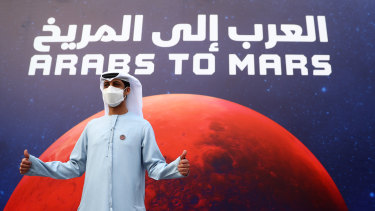 A man poses for a picture in front of a promotional poster in Dubai, United Arab Emirates.Credit:Getty Images

As it approached Mars, the spacecraft fired its main engines for nearly half an hour in an intricate manoeuvre that slowed down the probe so it could be captured by the planet’s gravitational pull. For several agonising minutes it was unclear whether the mission had succeeded, due to the time delay in relaying signals back to Earth.

Then, as ground controllers received confirmation that the craft had entered orbit, they rose to their feet and broke into applause. The team, which has an average age of just 27 due to the UAE’s young population, will have found the ordeal extraordinarily tense – around 60 per cent of Mars missions end in failure.

The Hope’s mission launch in July was only made possible by a rare, close alignment between Earth and Mars. 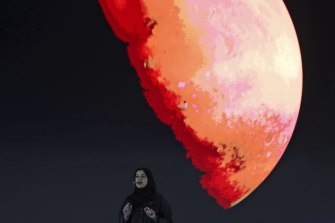 Sarah al-Amiri, Emirati Minister of State for Advanced Sciences and Deputy Project Manager of the Emirates Mars Mission speaks ahead of a live broadcast of the Hope Probe.Credit:AP

The spacecraft is roughly the same size as a car, cost $US200 million ($258 million) to build and was developed in Boulder, Colorado, before it was sent to the launchpad in Japan. The UAE team collaborated with the University of Colorado, the University of California, Berkeley, and Arizona State University in the United States.

“It was a dream we never dared to dream, because we didn’t think it was possible for the UAE to have a space program, let alone to send a spacecraft to Mars,” Sarah al-Amiri, the Emirati advanced science minister, said last year.

Erdogan announced the program, seen as part of his vision for placing Turkey in expanded regional and global role, during a live televised event laced with special effects. 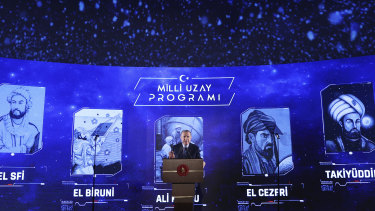 Erdogan also declared Turkey’s aim to send Turkish citizens into space with international co-operation, to work with other countries on building a spaceport and to create a “global brand” in satellite technology.

“I hope that this roadmap, which will carry Turkey to the top league in the global space race, will come to life successfully,” he said.

Most Viewed in World