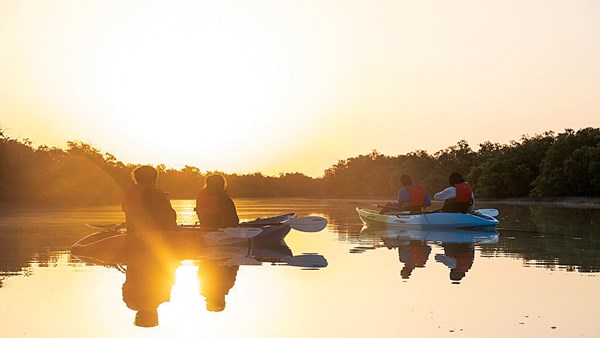 The Environmental Protection Agency in Abu Dhabi has monitored the increase in environmental awareness in the capital’s community to 88% during the year 2021, after it was 82% in 2018. The authority stated that since the beginning it has set strategic goals to increase the level of environmental awareness, and the annual study of environmental awareness and behavior revealed 2021, conducted by the Ministry of Climate Change and Environment in collaboration with its strategic partners from the relevant state-level authorities, for the increase in general environmental awareness in Abu Dhabi community to 88% during 2021.
The reason for the increase, which it has registered, is according to the study the efforts that the authority in collaboration with its strategic partners has made to increase environmental awareness through the programs and initiatives it has launched in recent years, which i.a. succeeded in achieving tangible results that have been reflected in increasing the level of environmental awareness and behavior in society.
Dr. Sheikha Al Dhaheri, Secretary General of the Environmental Protection Agency in Abu Dhabi, said: “When we look at the environmental challenges we face, we often find that human activity is at the heart of the problem. But human activity can also be at the heart of the solution. By raising awareness, changing behavior and encouraging commitment to the environment, we can address many of the environmental challenges we face. “
Al Dhaheri suggested that the Authority may be the primary body concerned with protecting the environment in the Emirate of Abu Dhabi, but that it does not have the sole responsibility to protect it. By working together, we can make a real difference to the environment.
Al Dhaheri explained that the authority has developed several environmental awareness programs for young people in schools and universities, such as the Environmental Marathon Program, the Sustainable Schools Initiative and the Sustainable Universities Initiative, and these programs have won many awards. The authority also seeks to raise environmental awareness among various sections of society about the beauty of the natural heritage and how it can contribute to its conservation. The authority’s efforts extend to training its employees to be “ambassadors” for the environment.
She pointed out that the “Authority” recently launched the “Badir” application, through which we seek to change the environmental behavior of the residents of Abu Dhabi and motivate them to be leaders in the positive transformation process. Since the launch of the application in January last year, it has managed to attract a large number of users who have downloaded the application and started using the application and performing environmental activities, and it has also managed to reach a wide range of different sections of society .
She pointed out that the initiative Green Enterprise Network, which the agency launched in 2019, has helped reach out to private companies, as the network includes a group of institutions that are engaged in environmental issues, through which knowledge and experience are exchanged and collaborate to help each other. promoting and improving environmental performance The Green Enterprise Network encourages the promotion of dialogue and cooperation between specialized agencies in all areas, in the public and private sectors, through the assessment of greenhouse gas emissions, resource sharing and best practice. The number of participating parties in the network has reached more than 85 participating members who seek to create real change in the direction of a better environment.